Today was our last show and probably our best. We had a 1:00 matinee. Today the audience was much more enthusiastic. It sounded as if perhaps more of them were from the States as they seemed to get the inside jokes a little better. Roslyn tried to watch the show and even recognized her "daddy," but then got a little impatient and Junel had to take her out.

Afterwards we struck and I met up with Junel and Roslyn at the James Joyce Bistro on the corner of Douglas and View. They had really good food and I sampled one of their stouts. Soon it was time to head back to the hotel and pack for the journey home.
Posted by Mark D. Williams at 4:34 PM 1 comment:

Saturday after breakfast Junel did her usual workout. We then did some shopping downtown. Since our show wasn't until 10:30 that night we had plenty of time.
Posted by Mark D. Williams at 4:20 PM No comments:

Tea at the Empress

The show last night had good energy. Unfortunately we only had about 20 people in the audience and they didn't seem to know it was permissible to clap. Today we had a day off between shows.

Junel went to work out after breakfast, so I watched Roslyn a while. She actually got a nap in. I had reserved a time at 4:30 for high tea at the Empress Hotel. Sharon was kind enough to come over and look after Roslyn, and so Junel and I took off for the Empress. 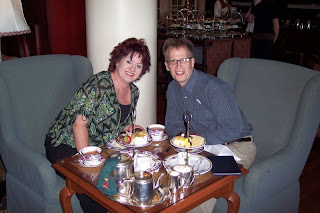 Junel and Mark at the Empress. Photo © 2008, Bacigalupo/Williams.

We had tea and their very special sandwiches and desserts of which unfortunately I can't recall the names. There was a guy playing jazz piano and the whole ambience was very relaxing. They also sent us back with some tea samples which was nice. All in all it was a great time.

I had rented a movie for us to watch when we got back, but I think I slept through most of it. Some of the cast and myself are fighting off colds. Hopefully we can finish the run without getting too sick.
Posted by Mark D. Williams at 12:23 AM No comments:

The Fringe website has a few audience reviews online at:

http://craig.forumotion.net/
Posted by Mark D. Williams at 12:18 PM No comments:

I hate to harp on technical issues, especially when it’s the first staging at the Fringe, but the sound levels of the ambitious Lysistrata’s War were quite out of whack and detracted from the overall production. Hopefully that’s all sorted by the time you read this. There are a few strong performances, particularly Stephanie Grigsby and Sharon Kerrigan and most importantly, it’s nice to see a classic work whose message is still relevant today.

Wine tours and Roslyn and I

Ethel, Nikki, and Junel went on a tour of 5 local wineries today. Maybe I can get Junel to write a little more about it.

My day wasn't quite as interesting other than I got to spend it with this cute girl. She and I hung out in the room, napped, went to WalMart, and watched Finding Nemo.
Posted by Mark D. Williams at 12:11 PM No comments:

Today was another day off and we needed some groceries, so Junel, Roslyn, and I took a drive to the health food store up the street on Douglas. After dropping the groceries off back at the hotel. We took a little drive. I put up a poster at Venue 6 and then we went and got some outside pictures of Craigdarroch Castle. After that we went down to the harbor, parked the car, and walked over to the Undersea Gardens.

Roslyn enjoyed their presentation. A diver would bring examples of the different kinds of sea life by the windows so the audience could see them up close. Roslyn was a little scared of the octopus though.

Then we walked by the Empress Hotel and checked it out. I am going to try to make reservations for high tea for Friday. I put a few posters up on the poles on Government Street. Then it was back to the car and over to Chinatown. We found a real cute silk Chinese outfit for Roslyn and then decided it was time to refuel.

We ended up going back to Swan's. I had their brew sampler and some fish and chips. Roslyn was getting real tired, so afterwards, we went back to the hotel.

I decided to see a show, so I joined up with Kurt and Nikki, and went over to Venue 3, which is around the corner from the Metro Studio where our show is, to see Les Ms. The two women performing were a non-stop tour de force of parody. They crammed practically the entire show into an hour including a hilarious tribute to Moulin Rouge.

Afterwards I dropped by the Fringe Club for a beer and got to talk to two of the Fringe Volunteers who commented that they had really liked our show. We chatted a while and then I talked with Meg, Stephanie, Jeff, and one of the Fringe Board members for a while.

Fringe shows are typically driven by a small number of people, with fairly small casts and fairly light technical demands. Some even attempt to make some form of statement. Lysistrata’s War has a cast of twenty-five and kept the venue technician very busy. As for the statement it tries to make, it’s basically a political allegory gone wrong.

In the tradition of the story of King Arthur being adapted into the musical Camelot or Pygmalion into My Fair Lady, you can see what David Hamilton (director and lyricist) and Mark D. Williams (composer and musical director) were going for. What they ended up with was their very own Sgt. Pepper’s Lonely Hearts Club Band.

The main problem with this adaptation of Aristophanes’ Greek comedy is the statement it tries to make. This may play well in Lake Tahoe, where this show originated, but it just doesn’t work here. The program claims that the play is not specifically about the war in Iraq, but when the Governor does a George W. Bush impression mid-song, it’s hard not to think otherwise. When you see pictures of Uncle Sam and a bald eagle flash across a large screen during Lysistrata’s solo “Why Must This Go On - I am Athenian”, it’s hard not to laugh and wonder if she doesn’t mean to sing “I am American.”

The technical demands of this show also cause some major problems. The cast really needed to be miked and they also needed monitors to allow them to keep in time with the musical score. In addition, the score is too loud and overpowers the cast. With numerous shows at the same venue, it’s hard to blame the technician for this; there’s very little tech time as it is and with a show this demanding, it’s going to be very difficult to get it right before the run ends.

The best part about a musical is the music itself; it’s why they are so popular. Lysistrata’s War follows the tried and true method of reprisals and dueling songs but the music is weak and clichéd. In addition, it is so heavily computer-synthesized that it becomes distracting and comes off as amateurish. It doesn’t help that some of the cast cannot sing very well, with the strongest singer being Lysistrata (Sharon Kerrigan). The lyrics were repetitive and seemed forced. I don’t know how many times I heard the words “stop” and “top” bundled together into a rhyming couplet.

The play runs almost 90 minutes but it feels longer. They go back and forth between the men and women in different settings, all the while we hear the shuffling of the set pieces and the jingling of the costumes. There were some funny moments that quickly got buried with some not-supposed-to-be-funny-but-funny moments. As the play went on, you could clearly hear some snickering and muffled laughter from the audience. Not good if you’re trying to make a statement.

By the end, I was hoping I’d hear another “top-stop” rhyme to close the show. Instead, Jesus came on the stage, yelled something and stabbed Lysistrata. Then the lights went out.

Click here for link.
Posted by Mark D. Williams at 10:01 PM No comments:

Last night's late show at 9:30 went even better in my opinion. We were able to get the monitor speaker and check some sound levels before the performance. I even cracked open the door to the house at the back of the audience and thought it sounded pretty good. Afterwards I met up with Meg and Denise at The Mint, a bar on Douglas between Pandora and Johnson, and had a Chocolate Porter. Johnny, Corey, Brandon, and Michael all joined us, though I left fairly early.

Today after checking in with Diane Rosner about the tax situation with our box office, Junel, Roslyn , and I drove out to Butchart Gardens. Before you arrive, there is a Butterfly Gardens on the left. We stopped and walked through. Junel took lots of pictures. It was real humid and hot in there. They were maintaining a tropical climate. There was quite a lot of different species of butterflies there. A few Atlas Moths also had just emerged from their chrysalises. They even had a pink flamingo. Roslyn enjoyed it a lot and we got her a little butterfly T-shirt for a souvenir.

We then proceeded to Butchart Gardens. We had a quick lunch at their Blue Poppy Cafeteria and then started the self-guided tour. Almost as soon as we had headed for the Sunken Garden we ran into Kristin, Liz, Sharon, and Stephanie who had all taken the bus out. Roslyn was showing everyone how to sniff the flowers and we all got a kick out of that as well as some pictures.

The gardens are incredible. After the Sunken Garden, you pass through the Rose Garden, the Japanese Garden, and then the Italian Garden. There are gorgeous fountains everywhere. It's definitely a must-see. 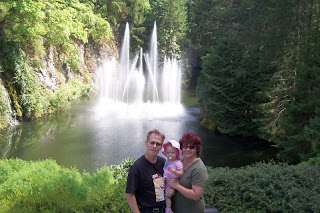 We came back to the hotel and tried to get Roslyn to take a nap. No luck. Sharon came over and babysat for us so that Junel and I could go to the Heron Rock Bistro and have dinner and listen to some jazz. The food was awesome and the band was a duo, a guitarist and a fluegelist who tripled on bass and vocals. All in all a fabulous day.
Posted by Mark D. Williams at 9:27 PM 1 comment: 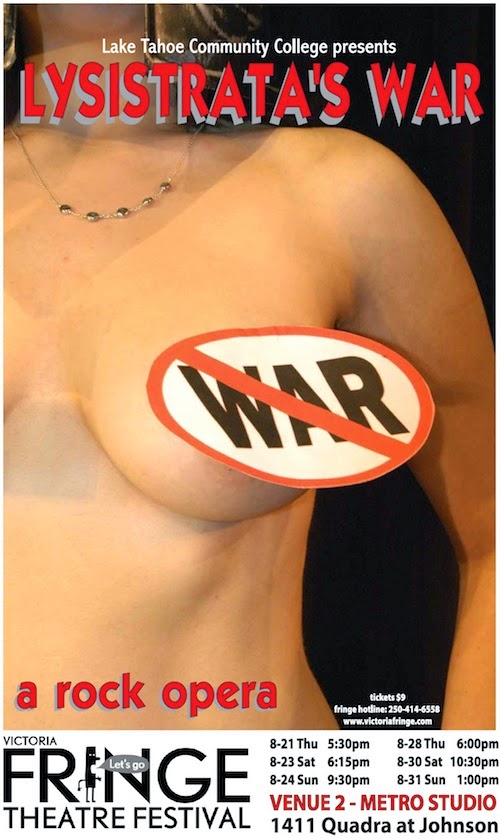